In 1952, Township residents voted to establish Community Consolidated School District 54 and to become part of the Palatine High School District 211, since there was no high school. In January of 1954, the new Schaumburg School opened with an enrollment of 87 and a faculty of three.

1954 proved to be the landmark in Township history. A local farmer sold his 160-acre farm to Sam and Jack Hoffman, owners of the Father and Son Construction Company, for a subdivision in Cook County. The land, now known as Parcel A, was located east of Roselle Road between Golf and Higgins Roads. The first homeowners began to move into the new subdivision in late 1955. The homes were built on half-acre lots and sold for $14,500. Down payments were as little as $700, and the interest rate was 4-1/2%. On September 19, 1959, residents voted to incorporate as the Village of Hoffman Estates. The charter was issued on September 23, 1959. The population at the time was about 8,000, and the incorporated area was just under three square miles.

Beginning in 1961, the first land north of the tollway was annexed to the Village of Hoffman Estates. Some 2,000 acres were annexed by 1962, including the areas that are now Winston Knolls, Westbury and the Paul Douglas Forest Preserve. The annexations more than doubled the incorporated land area.

A volunteer fire department was formed in December, 1956, with each homeowner contributing $25 toward the purchase of a small pumper. The homeowners also began a small public library in the original Village Hall located on Illinois Boulevard. In the 1960s and 1970s, the Village continued to grow rapidly, with the construction of both single- family homes and multi-family developments. The population nearly tripled to 22,000 in 1970, grew to 37,000 in 1980 and the 1990 census put the total population at 46,363 with over 16,000 households.

Public facilities such as schools, fire stations and library branches were built during this period to accommodate the area's rapid growth. A Village Hall and Police complex opened on Gannon Drive in 1972 and was the first municipal building in Illinois to be constructed under the guidelines for handicapped accessibility. The new U.S. Post Office, also on Gannon Drive, opened in the fall of 1988. A new Public Works Center opened in early 1990. Finally, the Village Hall was relocated to a new facility in 1991. 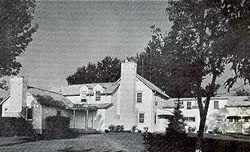 The late 1980s and early 1990s saw a shift from a primarily residential community with the development of numerous commercial projects. Suburban Medical Center (renamed St. Alexius Medical Center in 1986) was opened in 1979. The Village's first auto dealership, Woodfield Acura, opened in late 1986; the latter was soon followed by Saturn, Nissan, Lexus and Land Rover. The Village's future growth is developing along the western boundary with some 2,000 acres slated for office, research, high-tech, industrial, and residential uses.

Today, the Village's estimated population tops out at over 50,000, with a total incorporated land area of about 19 square miles.  School District 54, which began with one school in 1952, is now the largest elementary school district in the State of Illinois (outside of the City of Chicago). Other school districts serving Hoffman Estates residents include Districts 46, 15, 211, U-46 and 300. Hoffman Estates High School was named as one of the outstanding high schools in the state in 1987 and the Village of Hoffman Estates has won six Governor's Home Town Awards for its innovative programs.