Since our department was formed in 1960 we have used a variety of police package vehicles for our Patrol Division. We started with Fords and Chevys in the early 1960’s and we had Pontiacs in the mid to late 1960’s. In the 1970’s our officers were driving Dodges, Plymouths, and Fords. During the 1980’s officers were using Dodges and Chevys. The 1990’s saw a mix of patrol vehicle models. We used the Chevy Impala, Chevy Caprice, Chevy Tahoe, Jeep Cherokee, and Ford Crown Victoria. Since the late 1990’s our department has used mostly Ford vehicles for patrol use. In 1997 we started using the Crown Victoria sedan and that was the mainstay of our Patrol Division until 2013. In 2012 the Ford Police Interceptor Sedan and Ford Police Interceptor Utility were introduced. Since its introduction we have utilized almost exclusively the Ford Police Interceptor Utility as our front line patrol vehicle. We do maintain some Ford Expedition units in our Patrol Division. The following timeline shows the evolution of our vehicles and equipment here at the Hoffman Estates Police Department:

The very first two squad cars used by the Hoffman Estates Police were delivered to the department at the end of April 1960. Our first two squad cars were a 1960 Ford and a 1960 Chevy. Both vehicles had a decal that was shaped like the state of Illinois. There was a star at the top and the words “Hoffman Estates Police” were printed on the decal. In November of 1960 Hoffman Estates Police Officer Willard Anderson was on patrol when he heard on his radio that the Hanover Park Police were trying to apprehend a speeding motorist. Officer Anderson drove to Barrington Road and Higgins Road and positioned his squad car, the 1960 Ford, as a roadblock in the middle of the intersection with his red light flashing. The speeding motorist crashed into Officer Anderson’s roughly 6 month old squad car and totaled it. Officer Anderson suffered back injuries as a result of the crash and was hospitalized for a short time. The offending motorist was arrested by other officers at the scene.

The 1960 Ford that was demolished in the crash in November of 1960 was replaced with a 1961 Ford Fairlane. The vehicle was painted blue and had the same decal on the side as the 1960 Ford. This vehicle is equipped with a Federal Signal Model 17 Beacon Ray red light. 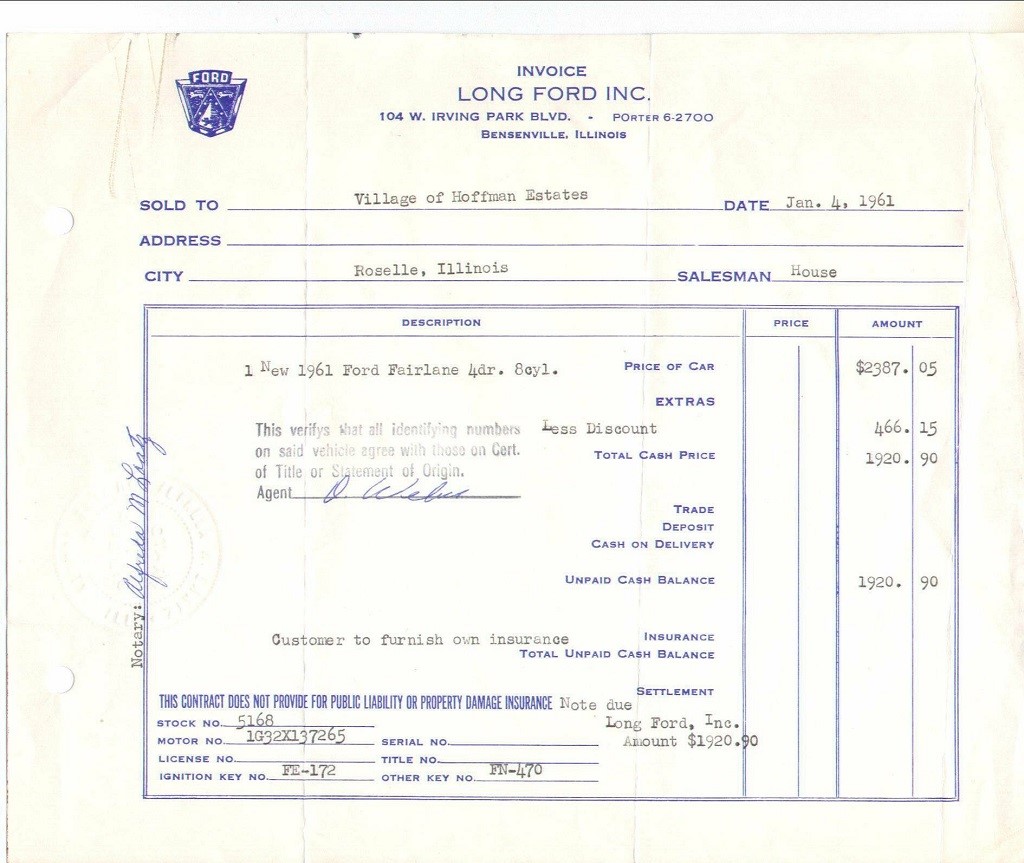 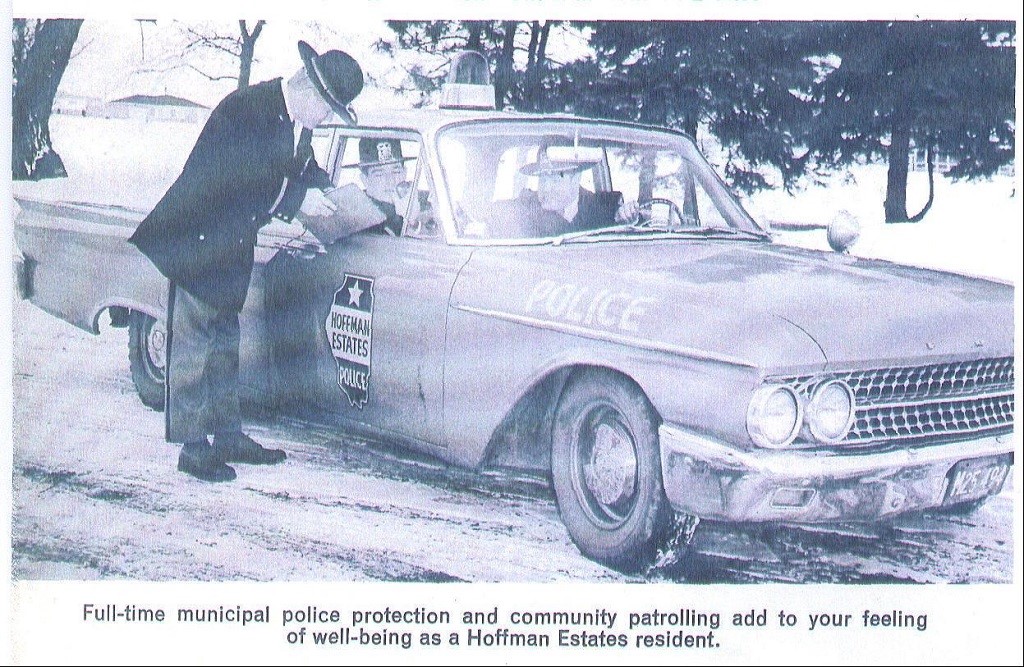 This 1966 Pontiac Catalina squad is being used by Officer Ron Sperandeo. The squad is the same color and has a similar decal as the 1961 Ford Fairlane. This was the common look for our squads in the 1960’s. This Pontiac has a Federal Signal Model 175 Beacon Ray “Hill Light” mounted on the roof. The video below shows a restored Beacon Ray “Hill Light.” This light in the video was actually used on one of our squads in the 1960’s. It was saved many years ago after it had been used on one of our Public Works vehicles. The light has been restored and is a great piece of HEPD history! 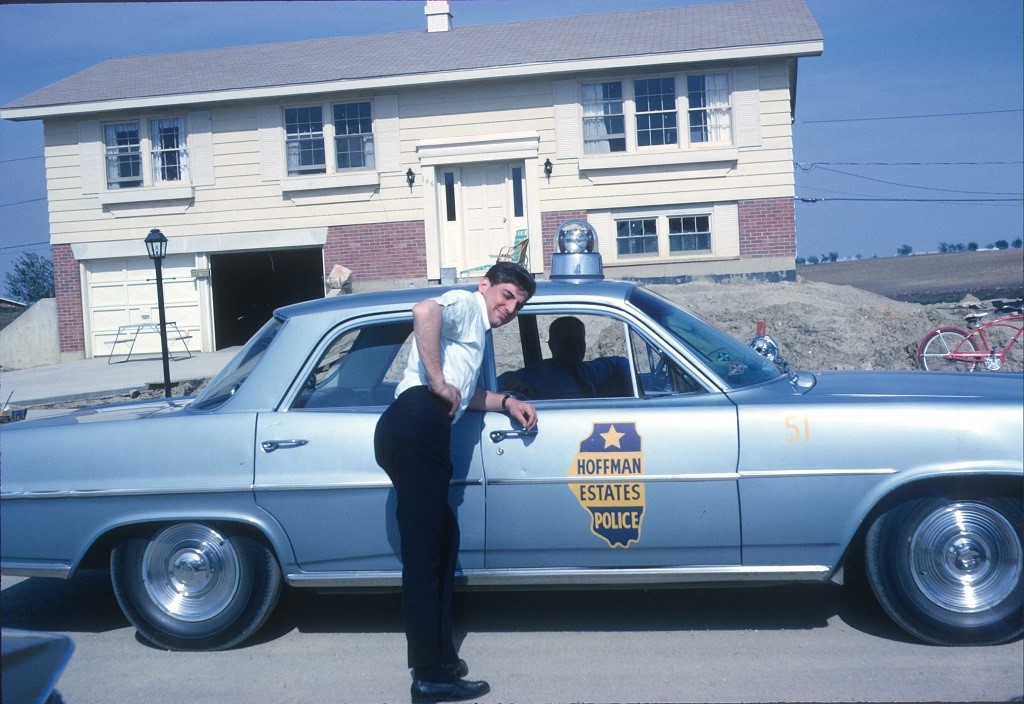 These 1974 Dodge Monacos show the design of our vehicles in the early to mid-1970’s. The vehicles were solid blue and you can see that the decal design has changed since the 1960’s. These vehicles had the Federal Signal “Visi-Bar” mounted on the roof. 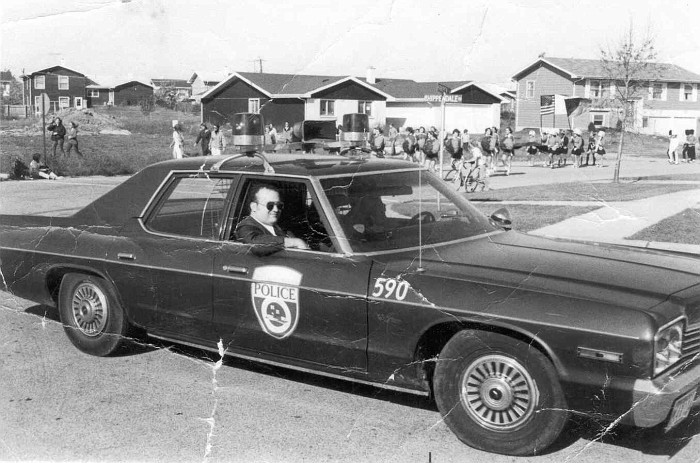 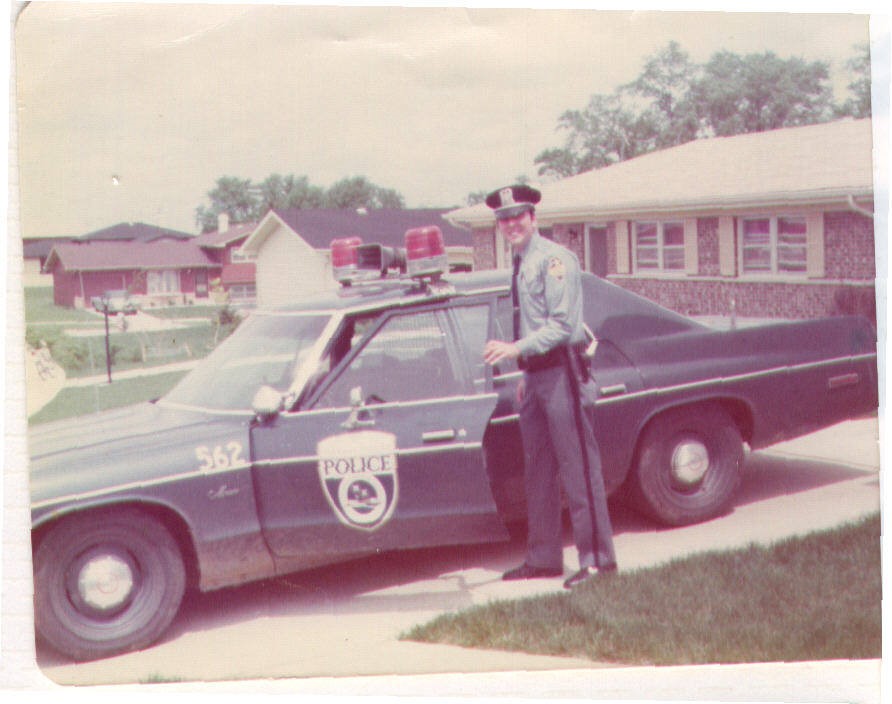 These photos of Sergeant Manning and a 1975 Plymouth Gran Fury were most likely taken at the 4th of July parade in 1976. The squad has the same design and lights as the 1974 and 1975 Dodge. 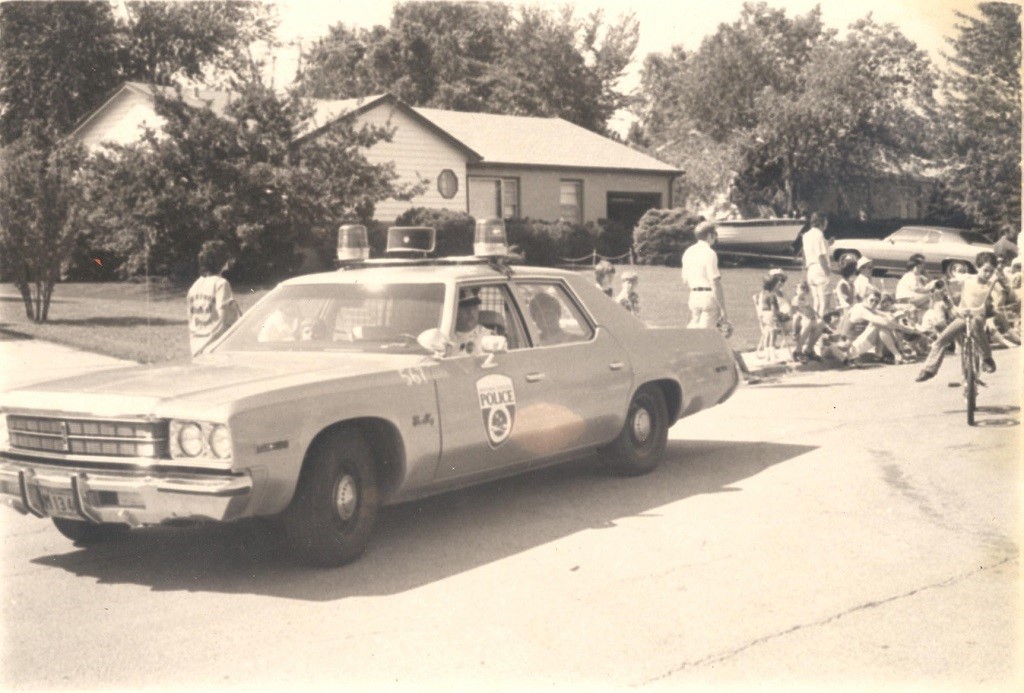 By the time this photo was taken of this 1977 Plymouth Fury our vehicles were now green and white. As you can see the decal on the door and the Federal Signal “Visi-Bar” were common throughout the 1970’s. 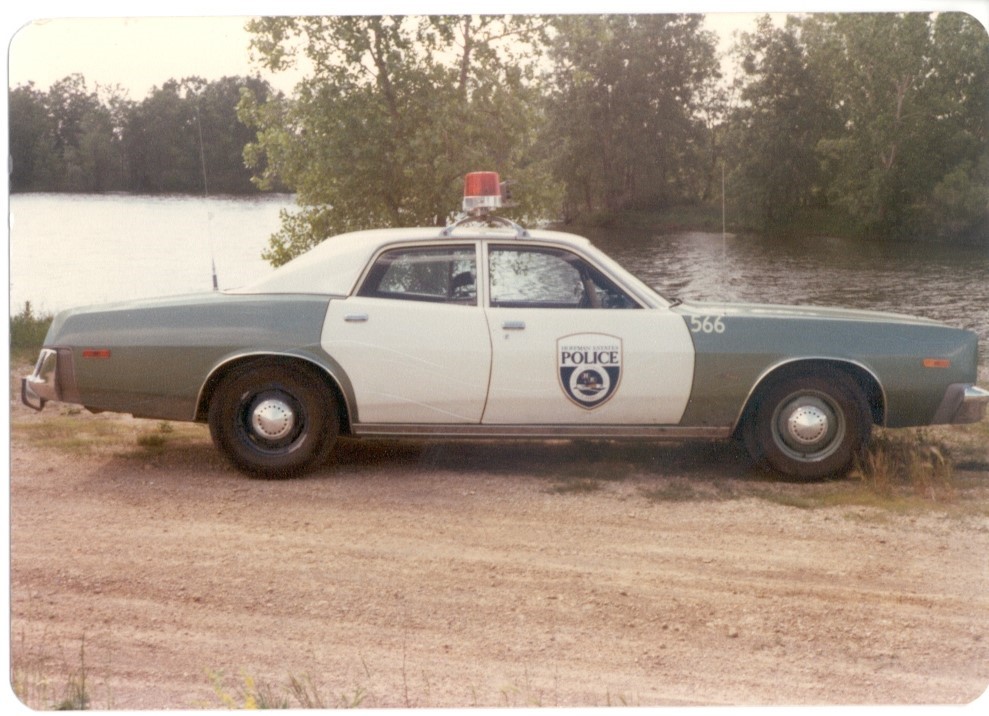 By 1980 we had transitioned to an all-white design with our HEPD decal placed over stripes on the front doors. The Federal Signal “Visi-Bar” lights had been replaced by newer model Federal Signal Code 3 SD light bars. 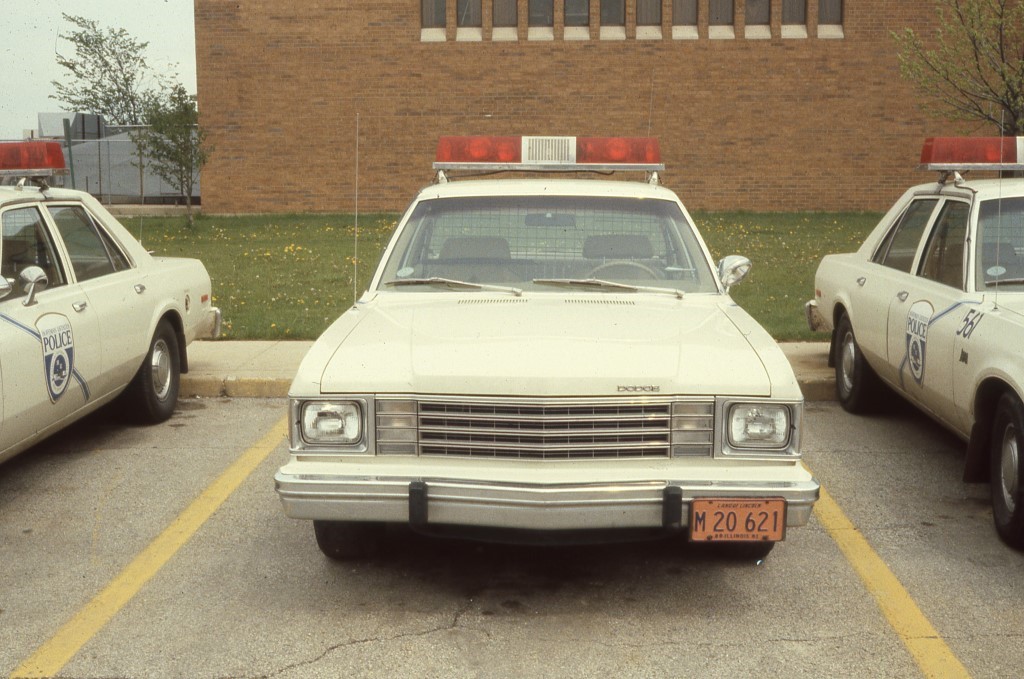 In 1981 our squads had the same design as the 1980 Dodge Aspen with one major change. You can see in the following two group photos with a 1981 Chevy Impala station wagon on the end that our vehicles now began to display a new style door decal. This new decal was representative of our new patch, which had been recently redesigned by Officer Dennis Jones. The squads continued to have the patch placed over stripes on the front doors. The Federal Signal light bars were still in use. 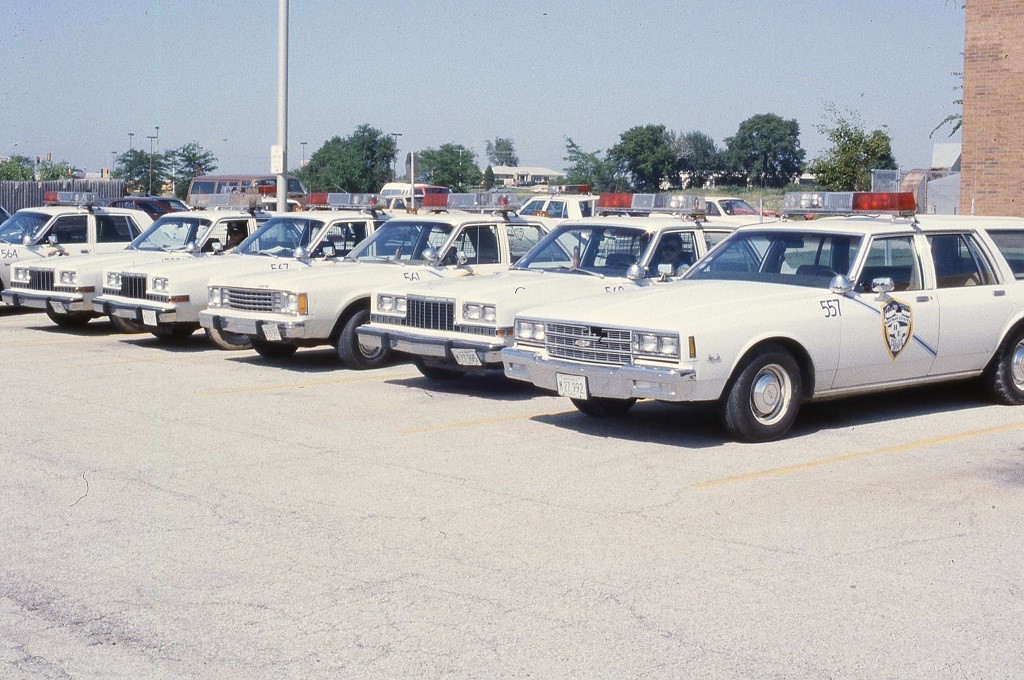 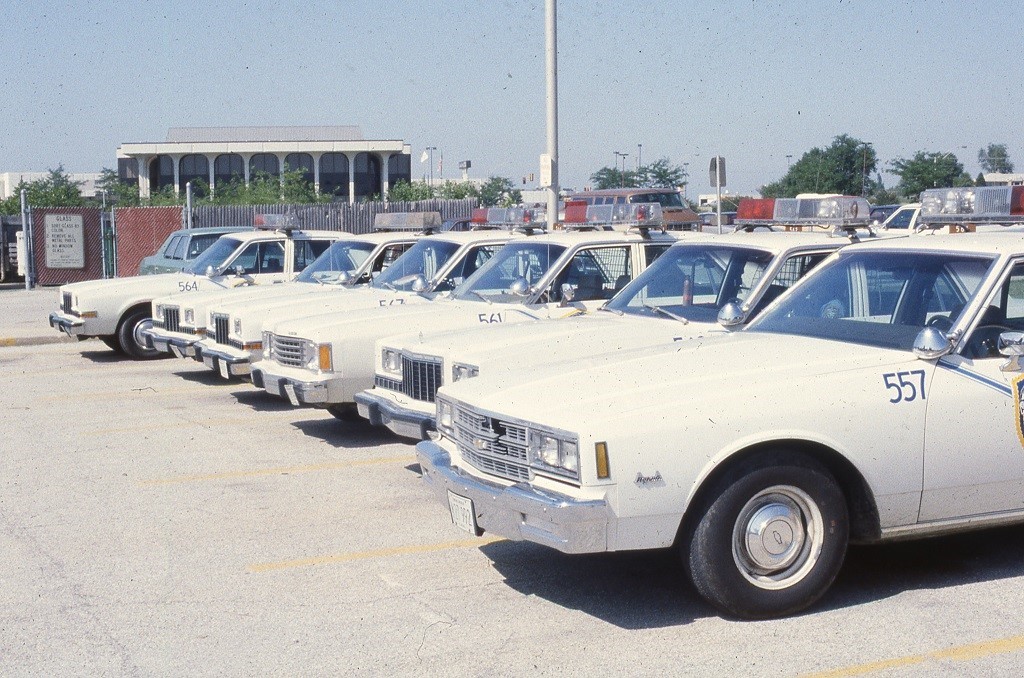 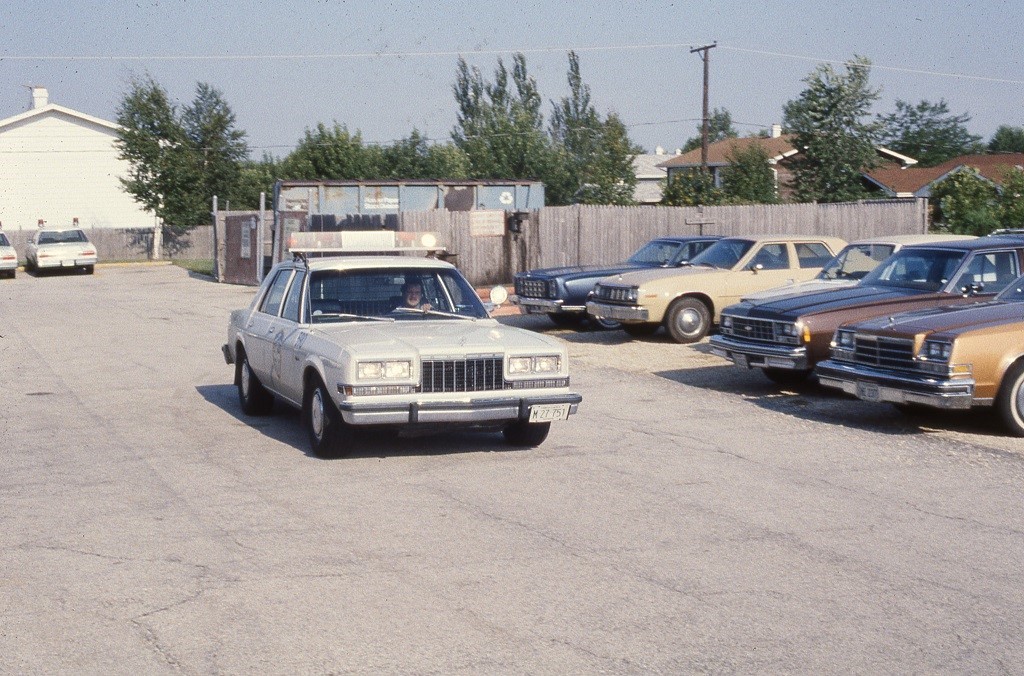 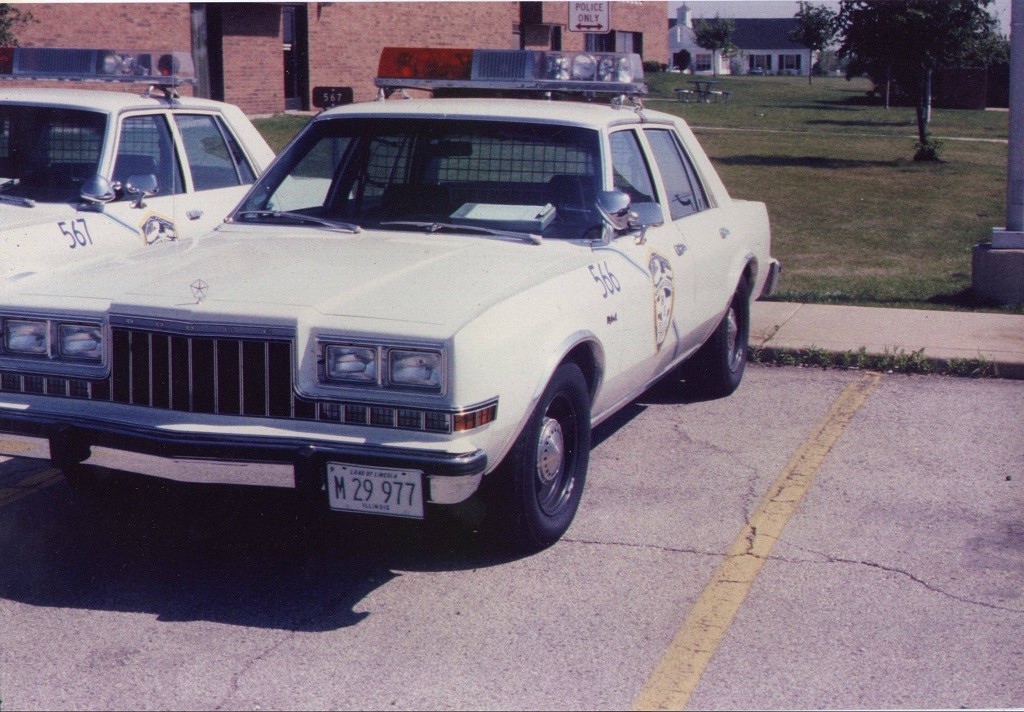 Officers in the late 1980’s were driving Chevy Caprice squad cars. The design of the cars had now changed back to an all white design with a blue stripe down the sides and “POLICE” on the front fenders. The patch decal continued to be displayed on the front doors. These vehicles still used the Federal Signal Code 3 XL light bars. 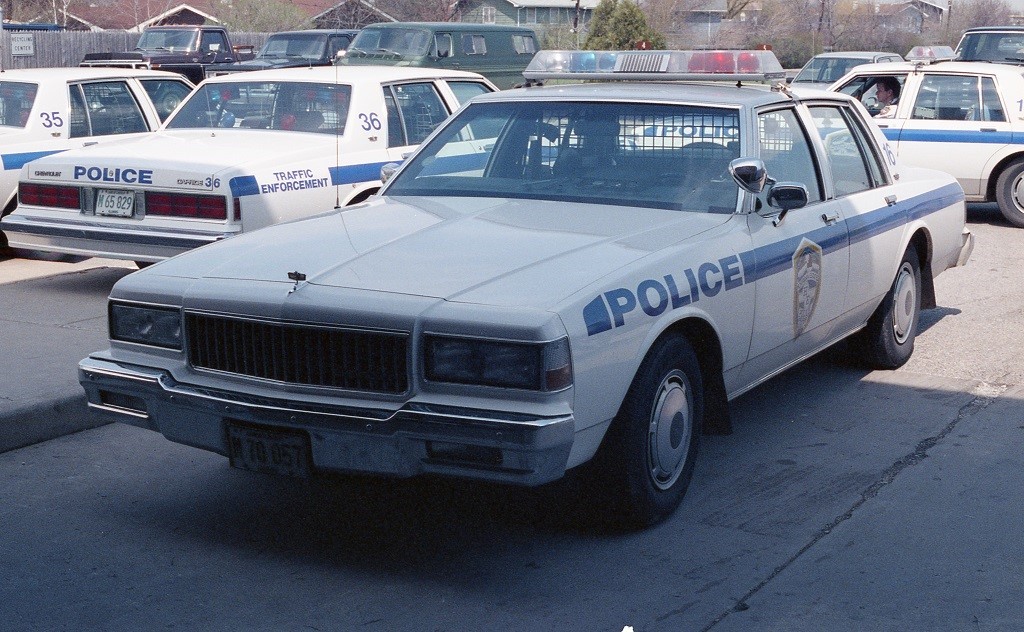 Hoffman Estates Police officers in the early 1990’s used the newly redesigned Chevrolet Caprice squad cars. The squad car on the right side of this photo is a 1991 Chevy Caprice. You can see that the graphics on the squad have changed once again. The patch decal was used on the front doors but the location of the stripe on the side of the car was lowered. “POLICE” was also moved from the front fenders to the rear quarter panels. The squad car on the left of the photo is a 1993 Chevy Caprice. At this point the decal was no longer used on the doors of the squads and it was replaced with “Hoffman Estates Police.” This design would stay the same until the late 1990’s. 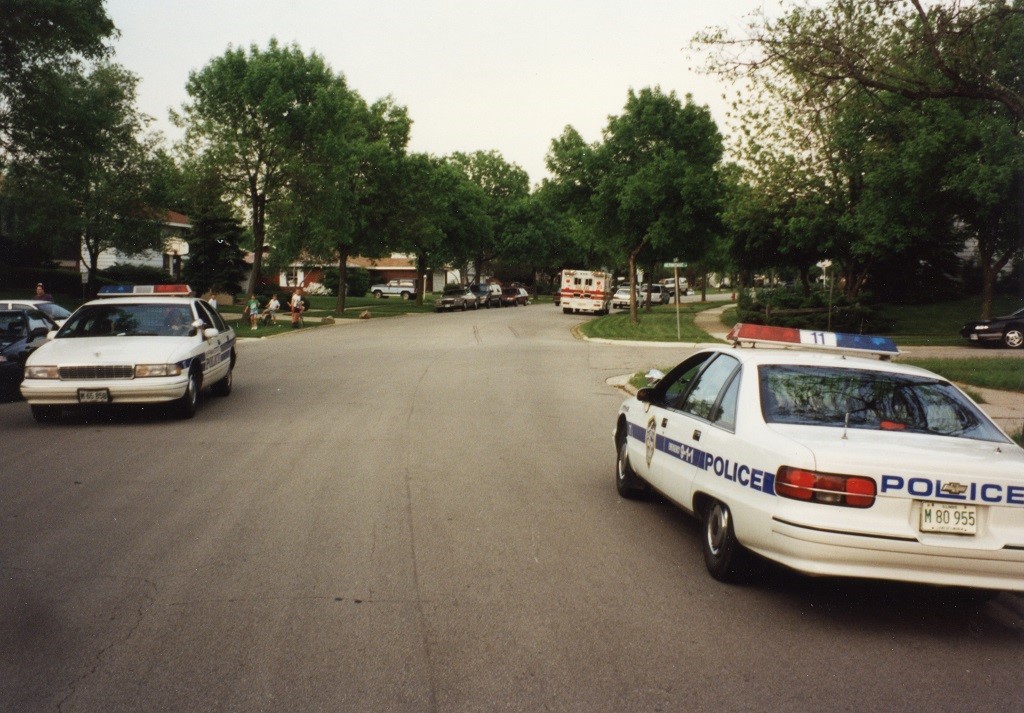 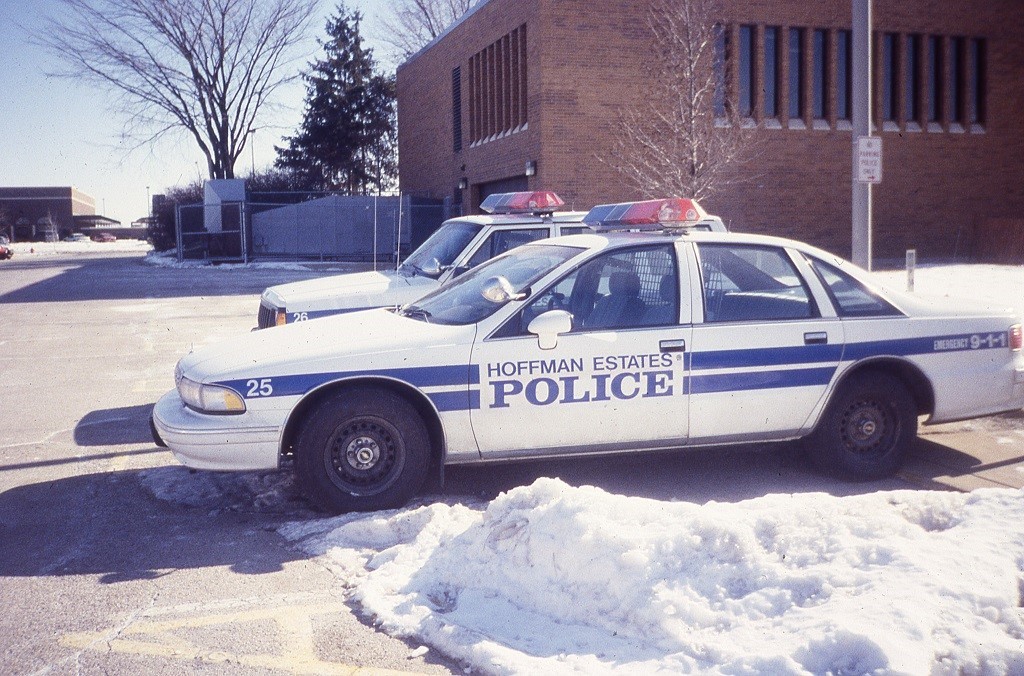 For a short period in the mid to late 1990’s officers in the patrol division also used Jeep Cherokees. They were marked the same as the Chevy Caprice patrol units and used the same Federal Signal Code 3 XL light bars. 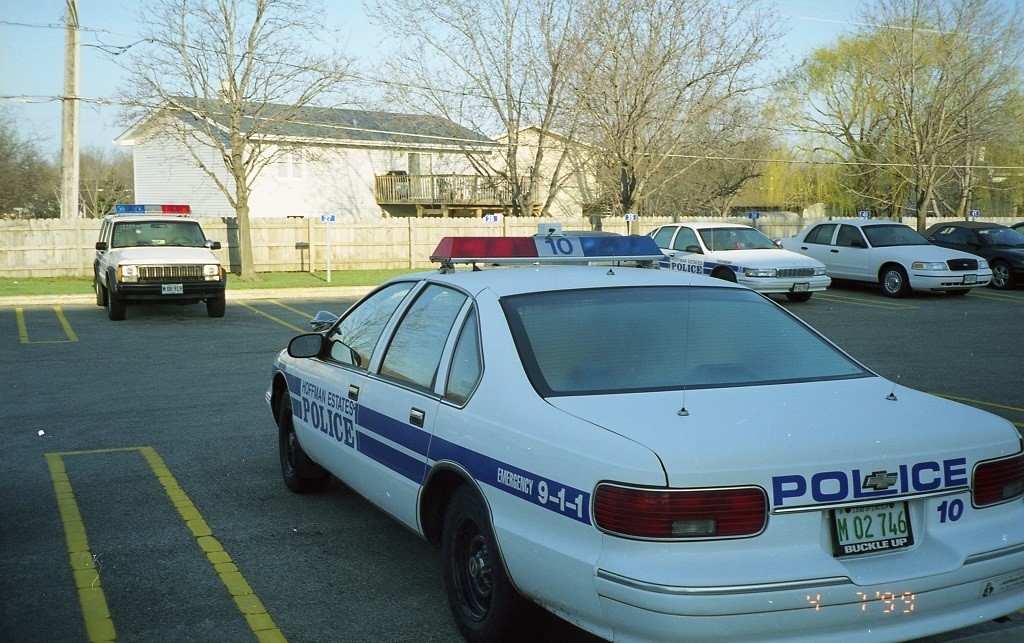 After the 1996 model year, Chevrolet no longer manufactured the Caprice for police use. Our department was one of many across the country that started to transition to the Ford Crown Victoria. The Ford squad cars continued to have the same graphics as the 1993-1996 Chevy’s. The Code 3 XL light bars were replaced and the squads now had Federal Signal Streethawk light bars. The Crown Victoria was redesigned by Ford for the 1998 model year so our department did not have very many of these style squads in our fleet. 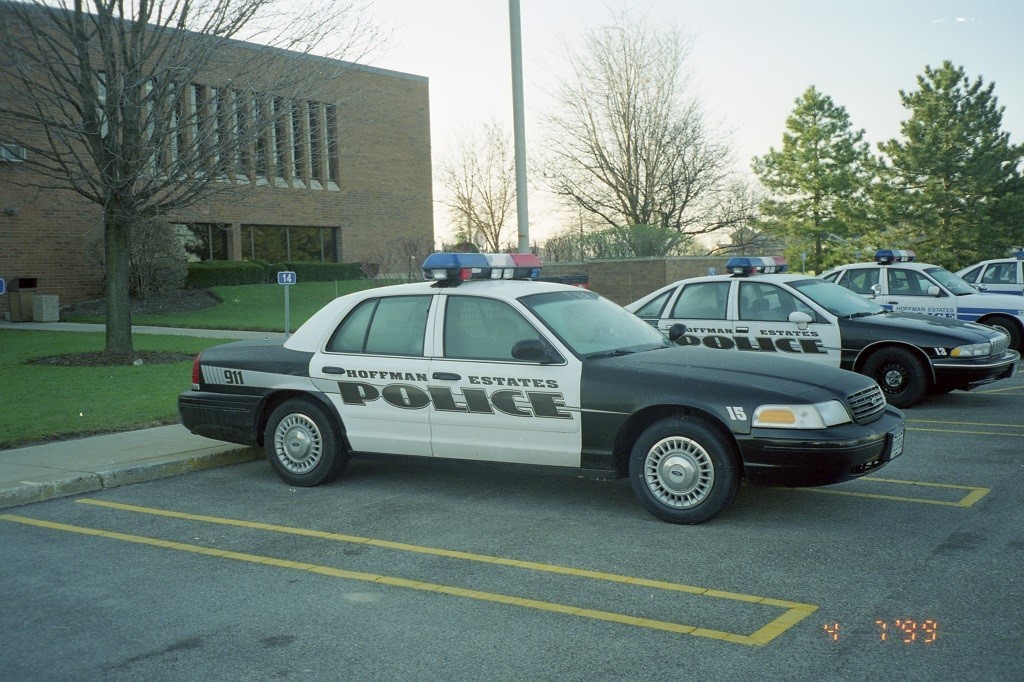 When Chevy announced that they were no longer manufacturing the Caprice after 1996 many departments, including Hoffman Estates, sent their older model Caprice squads to a dealership in Michigan to be refurbished. That’s why this 1994 Chevy Caprice was still in our fleet in 1999. 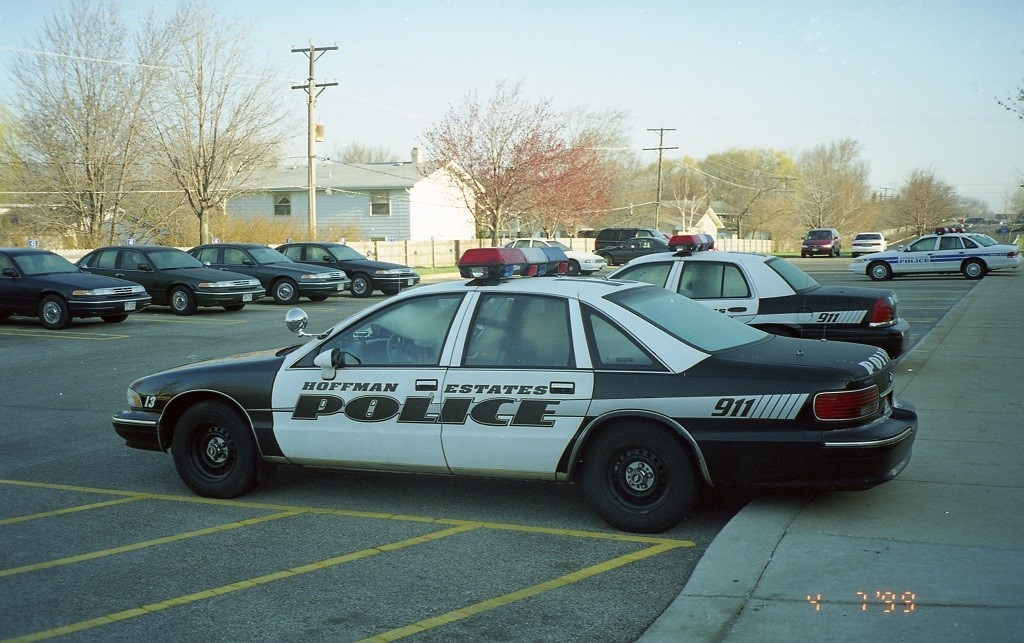 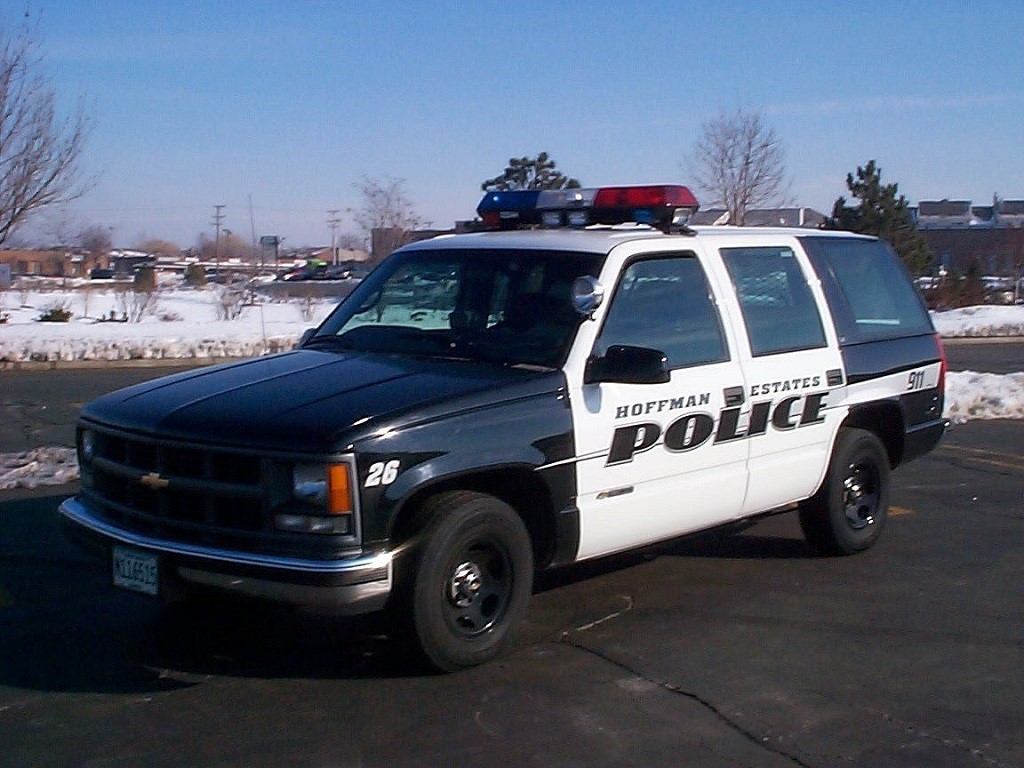 After the tragic events of September 11th, 2001 we added an American flag decal to the front fenders of our vehicles. All of the other graphics stayed the same. 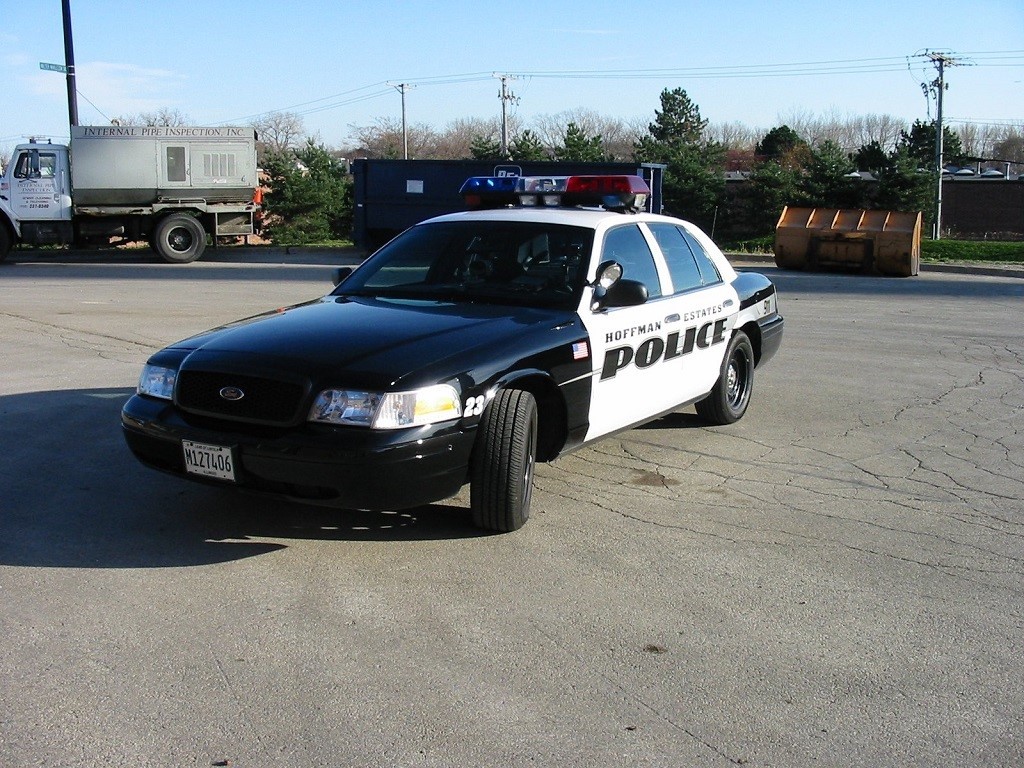 Normally our department kept all of our front line patrol vehicles the same style, which was fully marked and equipped with a light bar on the roof. This “slick-top” 2005 Ford Crown Victoria was assigned to our Patrol Division and was the first patrol vehicle in quite some time that did not have a light bar. 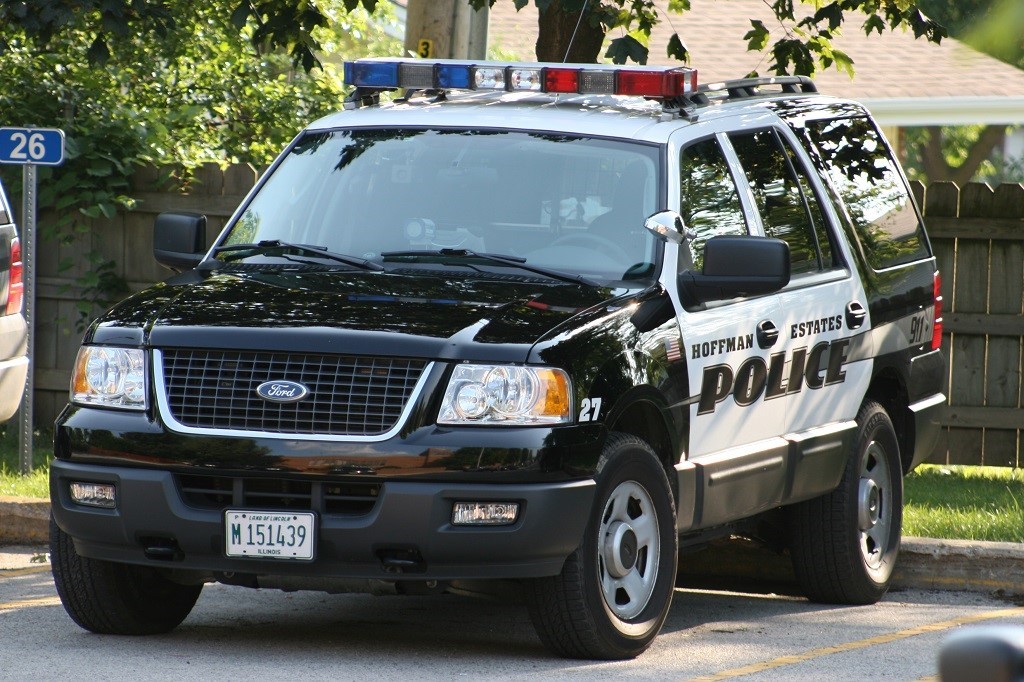 By 2007 we had started to replace the Whelen strobe/LED light bars with newer Whelen Liberty all-LED light bars. 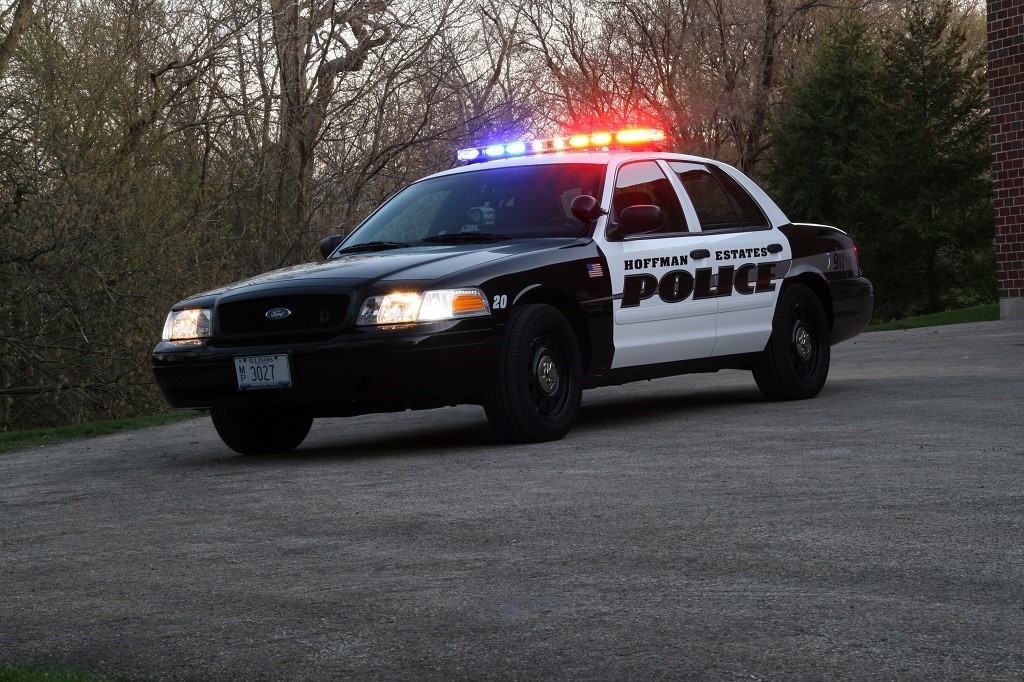 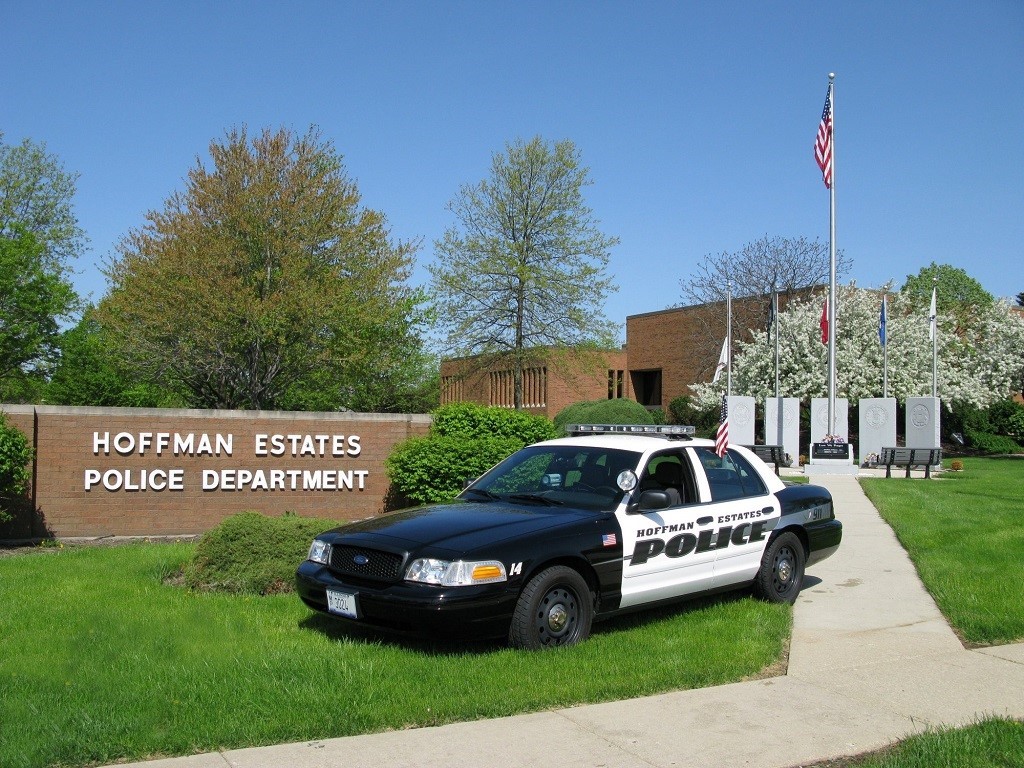 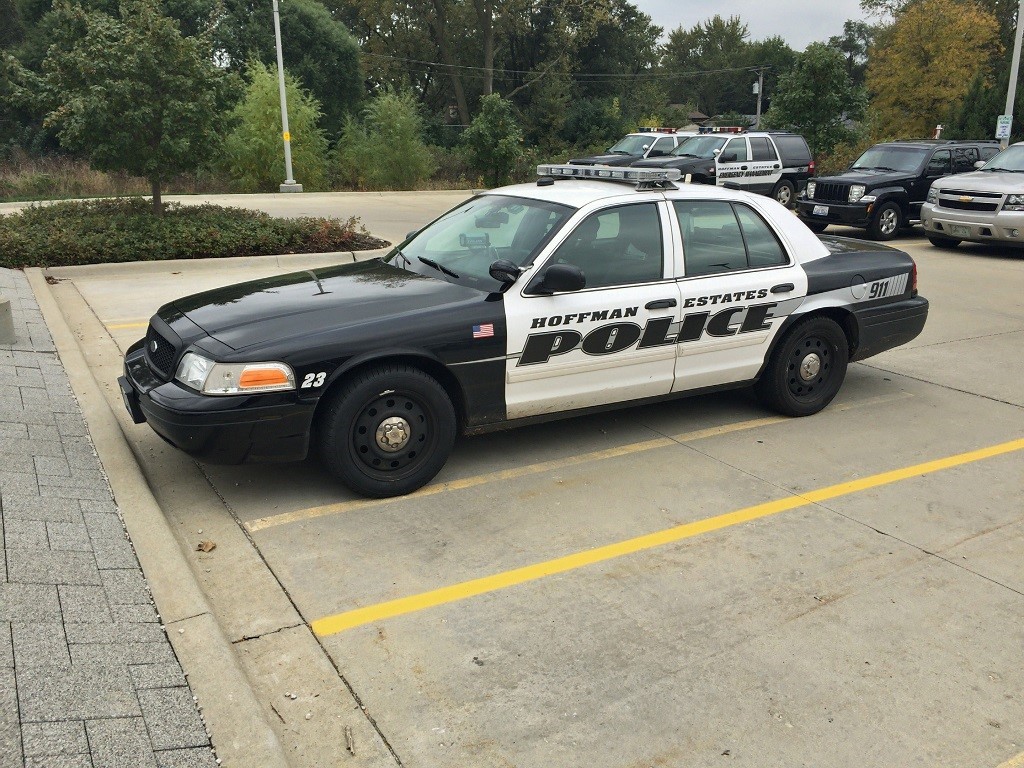 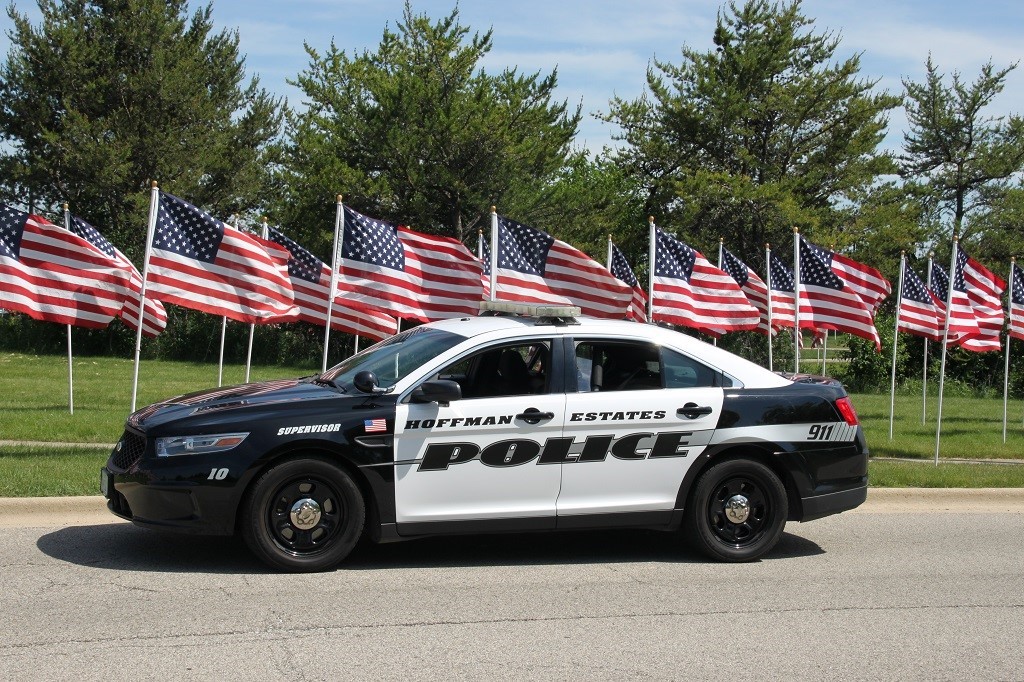 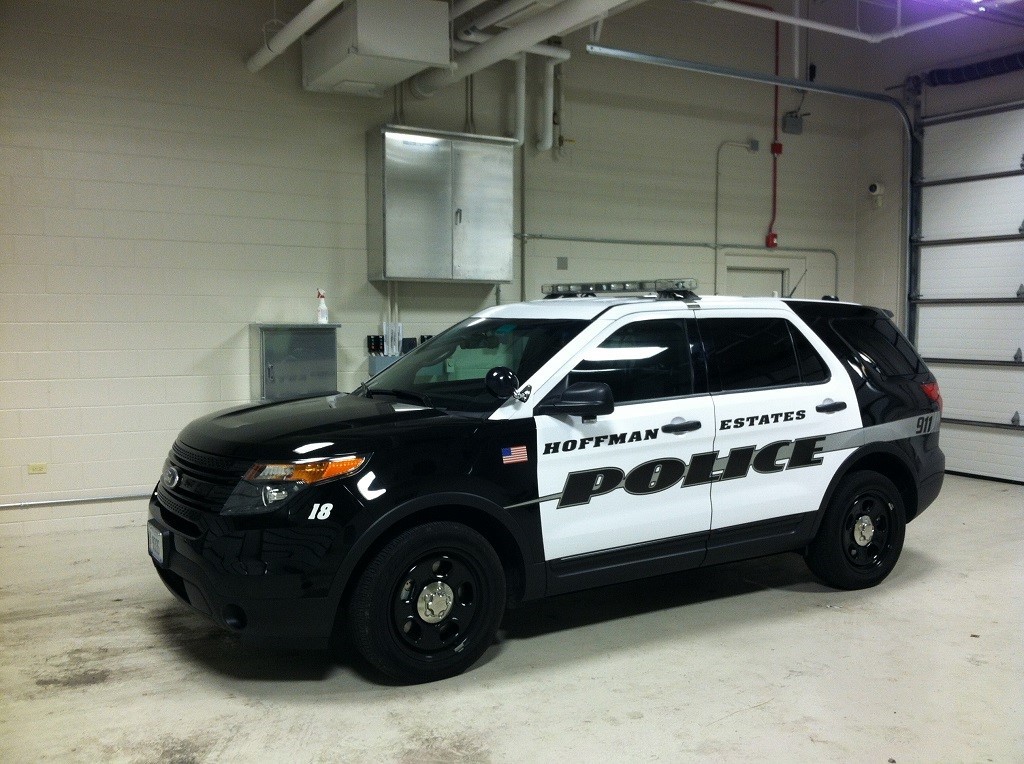 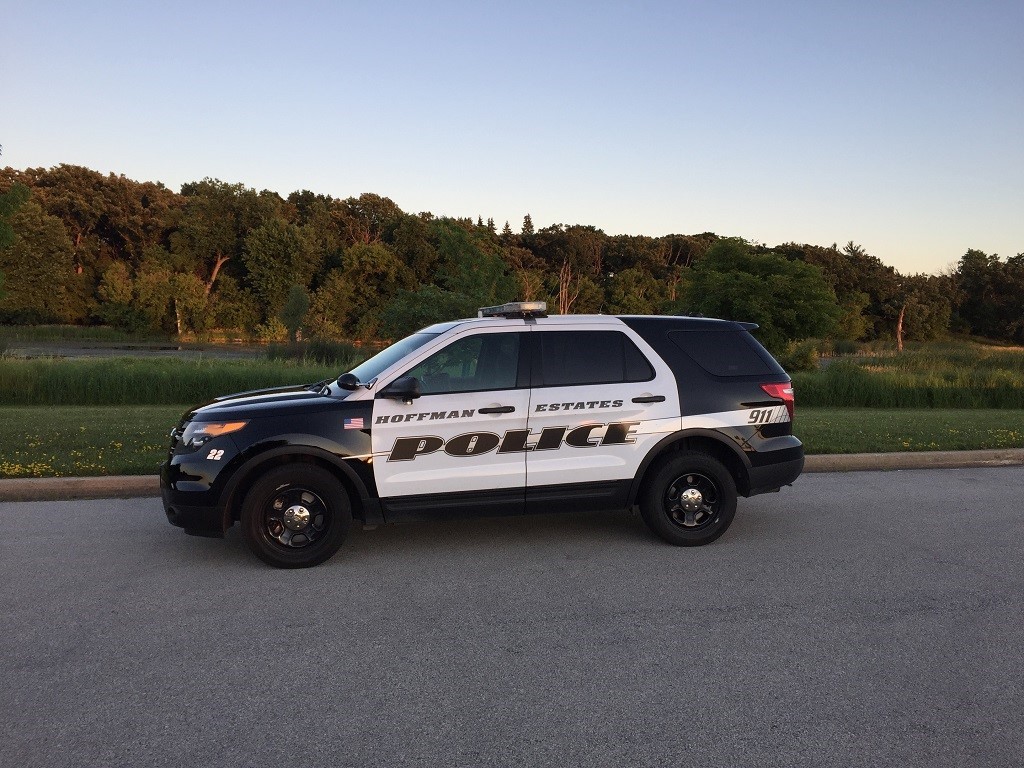 Our department continues to use the Ford Expedition for the Incident Command vehicle due to the large amount of equipment and supplies carried in the vehicle. 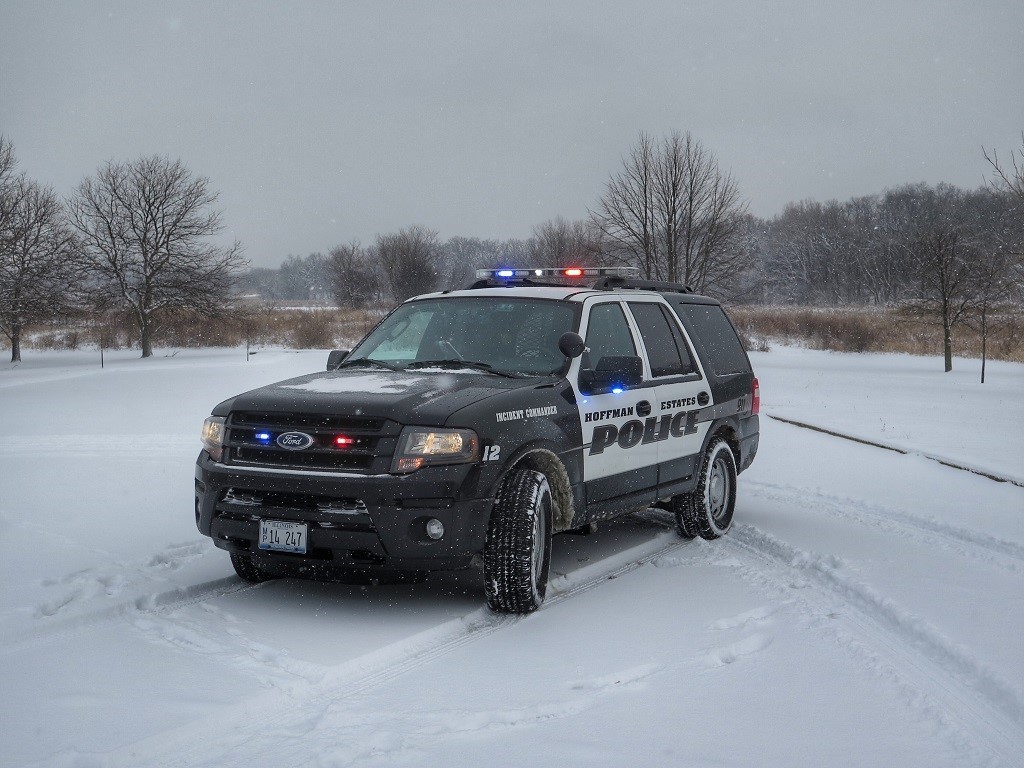 The Police Interceptor Utility has undergone some design and performance changes since it was first used in our fleet in 2013 but the exterior graphics continue to be the same design. The squads continue to have the Whelen Liberty LED lightbars. 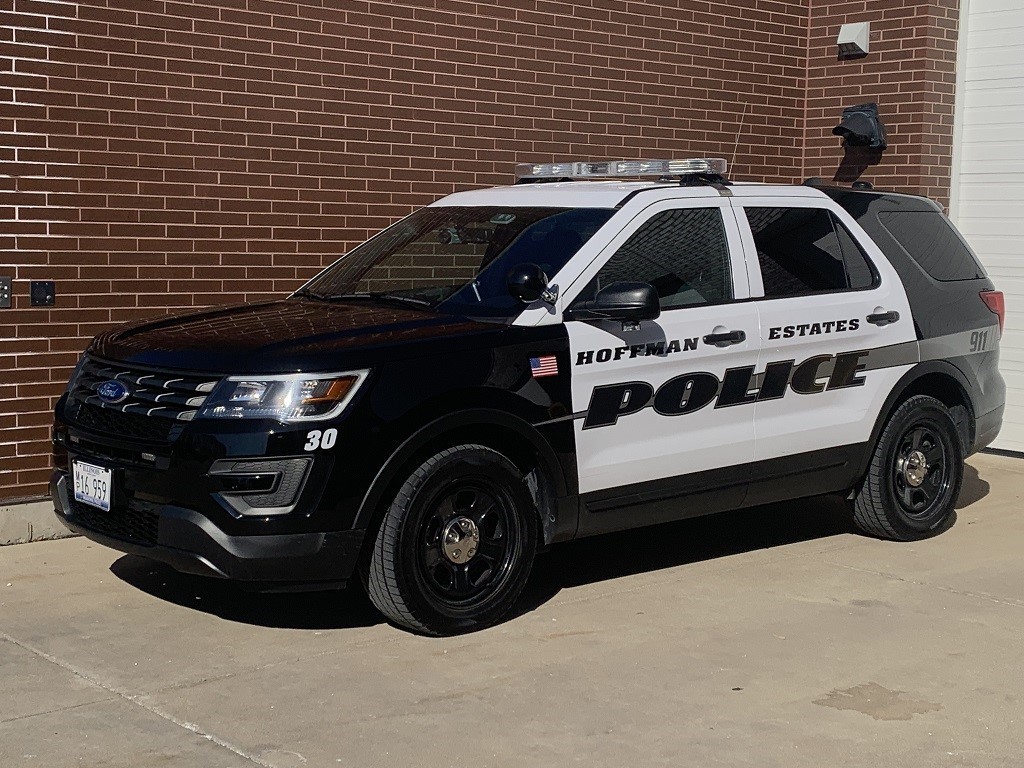 We hope you’ve enjoyed viewing these photos. We will continue to update this page as our vehicles and equipment continue to evolve.