Most Village facilities are closed to the public until further notice, and some non-essential services are currently unavailable or reduced. Report emergencies to 911. More... 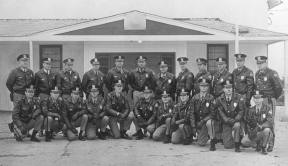 The Village of Hoffman Estates was incorporated in 1959 at which time a formal police department was established. The initial employees hired as sworn police officers came from previous police backgrounds. The newly formed force was composed of approximately ten officers.
Sworn in as the first Police Chief for the Village was Mark A. Orlick and he served from 3-17-1960 to 6-28-1963.The second Chief was John J. O'Connell who served as Acting Chief from 6-28-1963 to 9-1-1963 and then served as Chief from 9-1-1963 to 7-1-1980.

Robert L. Manning was Acting Police chief for a short time in 1980. In August of 1980, the Village of Hoffman Estates hired our fourth Chief, James Taylor, a police chief from New Berg New York. Chief Taylor’s direction resulted in the development of the Deputy, or Assistant Chief position which still exists today. Chief Taylor commanded our force until 5-5-1986 at which time James Dutton became the Acting Chief and served to 1-2-1987.


Our sixth Chief was Donald Cundiff, who came to Hoffman Estates from previous Departments 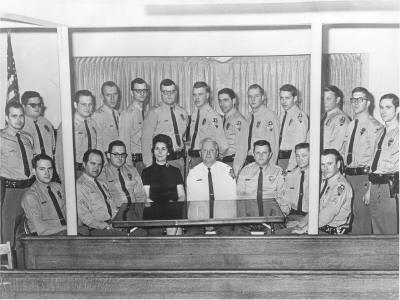 including Rolling Meadows and West Covina, CA. Chief Cundiff retired from law enforcement in 1997. Clinton J. Herdegen was appointed as Acting Chief, until he was permanently promoted to that position in 1998. Chief Herdegen represents the first chief to be promoted by rising through the ranks of our own department.

The first set of uniforms worn by the Hoffman Estates Police Department consisted of charcoal gray, thigh length coats, navy blue trousers, black shoes, and charcoal gray-trooper style hats. Each officer also wore a weapons rig that included not only the waist belt but a Sam Brown style, shoulder strap. The squad cars were dark blue with one singular, bubble-style, revolving, red light on the roof.

The very first Hoffman Estates Police Station was located near the intersection of Illinois Blvd. and Evanston Street where the Children’s Advocacy Center building is now located. There only existed one set of bars on the one rear window of the building and was in that room that the police officers arranged a makeshift jail cell. In those days, there existed room for only one prisoner, eventually 2 cells were installed. 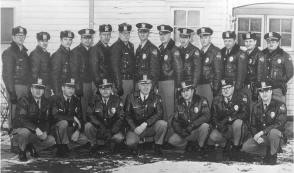 There were no portable or squad car radios in order to transmit calls. Information from the station to the officers out on patrol had to be relayed in a “strange” manner.

In order to know if they were needed somewhere, the officers continually passed by the station and looked to see if the window at the front of the building had it’s shade pulled down or if the shade was still up. If it was down, this was the message to the officers on the street that a police call had come in and the officer noticing the downed shade should pull into the lot and go inside of the station to determine what type of assistance was needed. Car radios were installed in 1967.

The Police Department moved its station to 1200 Gannon Drive in 1972 in what exists today as a modern style facility.

It was the 1st municipal building in the United States to be construction under the guidelines for handicapped accessiblity.


The uniform design for the Hoffman Estates Police officers changed in the 1960s to a light blue uniform shirt, French blue trousers with a dark blue stripe down each leg, black shoes, and a navy blue, five point hat. The coats worn at that time were copies of the Chicago Police Department leather coats, navy blue in color. We still use that style of coat today. A shoulder strap is no longer worn with the weapons rig.

This uniform style remained until the 1980s at which time the French blue trousers were replaced with navy blue trousers containing no stripe. In July of 1999 at which time the light blue shirt was replaced with a navy blue shirt. Officers were permitted to wear either a dress, navy blue tie, or a mock, navy blue, turtle neck shirt under their long sleeve, uniform shirt. The short sleeve shirt required no tie or mock turtle neck.