Ever wonder what's in a police car? 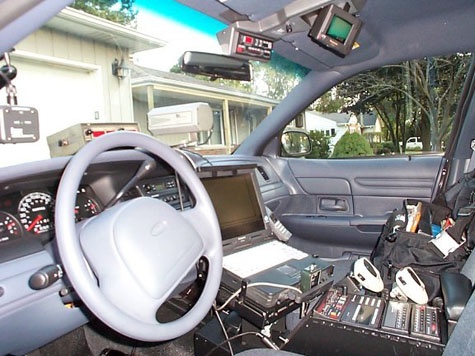 Video Camera - With a full VCR payer/recorder in the trunk, this camera video tapes all traffic stops. The camera is activated when the emergency overhead lights come on. Sound is recorded from the microphone carried by the Officer. These tapes are then used in court or are used to settle a complaint from a motorist.

Radar - This unit records the speed of vehicles while the police car is moving or parked. The antenna mounted on the dash can be rotated in either direction.

Lap Top Computer - The computer is hooked up to a wireless modem and can transmit and receive information. Calls are sent to the computer giving the Officer the facts of the call along with cross streets for faster response. The Officer can also "run" names, vehicles and property to see if they are wanted or stolen.  The computers are also used to communicate between other officers and dispatch.

Local Radio - This microphone is used for all communications between Officers and dispatch in the Village. Calls for the police are taken in Arlington Heights by NorthWest Central Dispatch, who then dispatches the calls over the lap top computers as well as the radio.

Emergency Radio - This will transmit to many police agencies in the area. It is used to transmit information such as a chase, officer safety information and serious crimes that have just occurred.

Lights and Siren - This is the control panel that activates the overhead emergency lights as well as the siren. Some squad cars are equipped with a device that will cause a upcoming traffic light to change to green for safer emergency travel .

Cell Phone - This can be used to follow up on calls or to help a stranded motorist.

Duffle Bag - Each Officer has his/her own duffle bag which holds reports, tickets, forms and other items that an Officer may need during his/her shift.