Many Hoffman Estates restaurants are open! Please click here for a list of restaurants open during COVID-19. 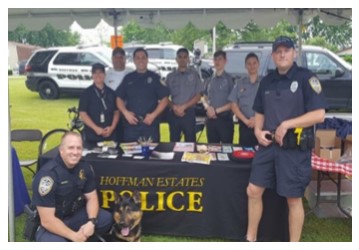 The concept of Problem Oriented Policing (P.O.P.) in Hoffman Estates began in mid-1991. The original program was designed to utilize uniformed patrol division officers assigned to the day and evening shifts. The officers were assigned to specific beat areas of the community for extended periods of time with the officer becoming familiar with the problems reported in a specific area of the community. The advantage to this type of approach is to recognize potential problems and deal with them before they escalate. This type of pro-active approach would not cause the citizen to call police repeatedly for the same problems on the premise that the officer would already be familiar with the problems and be actively working towards a solution.

Other duties include appearing at block parties, working with PTA Youth Programs, citizen surveys, landlord/tenant problems, parking and animal problems/disputes, and any other assignments which require research or follow up. The vast majority of time is spent dealing with neighbor/neighborhood disputes which require more time and effort than a patrol officer can provide.

In a proactive effort, we compile a quarterly summary sheet of all calls for service coming into our Department. By doing this, we can isolate areas with continual problems and repeated calls of the same nature and work on corrective measures.

Question can be directed to the P.O.P Officer Kruschel.

Free viewers are required for some of the attached documents.
They can be downloaded by clicking on the icons below.