The Village Board approved the Comprehensive Bicycle Plan and Map on May 17, 2010.  A copy of the plan and map, along with a presentation given at the meeting, are provided below.

Click here for the 2014 version of the Bicycle Map.  A number of on-street and off-street facilities have been implemented since the plan was approved in 2010.  More improvements are in the works.

The Bicycle and Pedestrian Advisory Committee oversaw the development of this plan.  The plan includes maps of existing and potential on street facilities, off street facilities, an evaluation of the Bike Level of Service (Bike LOS) for on street candidates, as well as sections on education, enforcement, encouragement, funding, and coordination.  Electronic copies of the plan and map are available below.

The following two items were presented at the Bicycle Plan Open Houses in May 2009.

Bike paths are physically separated from the road. They are typically parallel to the road, but may also be on a completely separate alignment. They are typically bidirectional whereas bike lanes are not. Design criteria are specified for width of the path, grade, curvature, clearance distance, visibility, traffic controls, etc. In addition, where the path crosses driveways and streets, the bicycle traffic may be controlled by signs.  Many examples of Bike Paths currently exist throughout the Village of Hoffman Estates, including Forest Preserve paths, Park District paths, and paths along major roads such as Algonquin Rd, Shoe Factory Road, and the plans for the Higgins Road path.  There are currently 27 miles of bike path in the Village and the Bicycle Plan identifies opportunities for an 15 miles, 5 miles of which is already programmed for installation.  A bike path is the most expensive bicycle facility with costs of approximately $700,000 per mile to construct.

Bike Routes
Bike routes are designated by “Bike Route” signs on the road, which identify it as such. At intersections, turn signs for the bike route are provided to inform cyclists how to stay on the route.  The Bike shares the roadway with moving and parked vehicles.  Supplemental signs with destinations and distances may also be used.  The Village currently has no Bike Routes, as part of the Bicycle Plan, there are plans for up to 44 miles of Bike Routes.  Bike routes are the least expensive facility to implement, with costs ranging from $2,500 to $3,500 per mile. 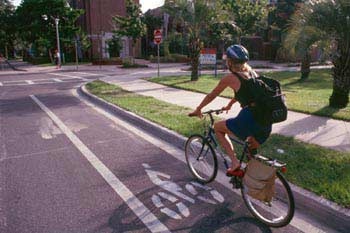 Bike lanes are identified by a longitudinal white pavement stripes on the road and may be supplemented by signing and pavement marking symbols. There are design guidelines for the width of the bike lane as well as the combined width of the roadway lane that must be met. Bike lanes are typically five feet wide including the gutter and are designated on each side of the road. Bicyclists share the same road as vehicles but the striped bike lane identifies the space for use by cyclists. There are design criteria for bike lanes, which specify width, presence of parking, and other features, such as inlet grate design. Parking is not permitted in marked bike lanes.  Most Village streets are not wide enough to accommodate Bike Lanes, as part of the Bicycle Plan, there are plans for up to 6 miles of Bike Lanes.  Bike Lanes cost approximately $9,000 per mile to implement.

Other Bike Plan Elements
The Bicycle Plan also includes elements such as intersection improvements, bike safety, education, enforcement, encouragement, bicycle parking, funding options and phasing of the plan.  Each of these elements helps to ensure the document is comprehensive.  Please view the Hoffman Estates Police Department's information on bicycle safety.

Free viewers are required for some of the attached documents.
They can be downloaded by clicking on the icons below.